5 Things Candidates Should Know About Recruiters 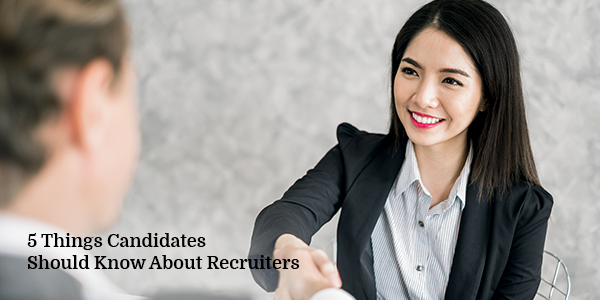 Most job seekers in the market might be too focused on landing a job that they forget a thing or two about the people who help them land it: the recruiters.

All recruiters – whether they’re working for recruitment firms or the company you’re applying for – are doing a role that was assigned to them. And as a job seeker, it helps to understand them better if you want to improve your chances of connecting with them and being more successful in your job search. Or at least, less annoying as a candidate.

Here are five things you should know about the work recruiters do.

1. Recruiters will not give you career advice.

When you show up to an interview, recruiters expect you to already have an idea what you’re signing up for. Sure, they’ll clue you in on the specifics, but one thing recruiters will not do is give you a pep talk to convince you what you really want to achieve in your career.

Some people go to an interview for a job they want and hesitate at the last minute upon discovering a small detail such as unfavorable schedule or unattractive perks. When this happens, you’re not only wasting the recruiter’s time, but also yours.

So, do yourself a favor and research as much as you can about a job opening before deciding to agree to a face-to-face interview.

2. Recruiters use different approaches in their process.

There are two major types of recruiters, which should give you a clue on how to approach the recruitment process.

The first one, internal recruiters, are basically employed by the company that is looking for candidates. They get their paycheck from the same company you’re applying for, so you may want to exercise more caution when negotiation for the specifics like salary and others.

The second one, external recruiters, don’t work for the same company you’re applying for. Rather, they’re employed by recruitment firms or staffing agencies whose main goal is to match job seekers to companies looking for candidates. Some external recruiters who already have many years under their belt may even be working for themselves to cut the middleman.

Don’t get it wrong, though – external recruiters still won’t serve as your career counselors. But they’d be more willing to let you in “behind the scenes” since their hands won’t be as tied when you ask about any issues that companies are having versus if you’re talking with an internal one who’s inclined to be protective of the company’s reputation.

That said, it’s a good idea to always be in your best self regardless whether you’ll be interviewed by an internal or external recruiter.

3. The recruitment process may not always go smoothly.

There may be two major categories of recruiters, but there are even more types of recruitment processes out there. There are cases when the whole process – from screening, interviews, and finally getting hired – takes a week or even less. But oftentimes, the recruitment and hiring process will not be as smooth as you might think.

Especially for external recruiters, there could be a lot of back and forth between the recruitment firms and hiring managers, and a lot of factors to take into consideration before you get the green light.

You may fit the specifications and requirements all right, but it could be that the company couldn’t afford your salary range, so it helps to level your expectations when it comes to the process.

4. Recruiters are not the ones who give the green light.

For job seekers, recruiters are the first and last step they have to go through when applying for a job. But for most of the hiring process, they have little to no say on whether or not the company will hire you or not.

A recruiter will relay how well you’ve performed during the interview to the hiring manager, but if your skills and background aren’t the right fit for the company’s culture, then it’s a no-go.

If you don’t get hired, don’t take it out on them because they don’t have the final say.

5. Recruiters sometimes don’t know what they’re really looking for until they find the right person.

As mentioned, the recruitment process doesn’t always go as planned. There are even times when the recruitment team doesn’t even have a defined set of characteristics and requirements that they’re actually looking for. They keep the job description flexible and solidify it only after they think they find the right person.

Some job seekers may find this practice unfair because they may think they’re not being given a fair chance to prove their skills. But while it may have its cons, this method may be more effective from the recruiter’s perspective.

Once they find the right candidate, there’s a higher chance that that person will fit not only in the job position, but also in the company culture, thus leading to increased retention rate for the company.

Whether you’ll be meeting with an internal or external recruiter, always keep an understanding mind and be in your best self. In the end, it’s not whether you have a stellar skillset, rather how well you handled yourself during the interview which could make them personally vouch for you during the hiring process.

TJ is a seasoned recruitment professional with a career spanning over 10 years. He has experience recruiting for various industries such as BPO, IT, Banking and Finance, Retail, Logistics, FMCG, Manufacturing, Legal, and Insurance. In recent years TJ's focus has been on high-end IT roles and headhunting for executive level functions. With a proven track record of excellent stakeholder and client management skills; and outstanding candidate experience, TJ is also an effective mentor to candidates and recruiters of Manila Recruitment. TJ has recently taken on a Recruitment Relationship Manager role, whereby he assists prospective clients of Manila Recruitment to convert their needs into detailed talent engagement plans to be delivered upon by the company's team of corporate and technical headhunters. On a personal note, TJ is happily married and a father of two adorable children. He spends his free time giving back to the community by being an active member of the local HR Community. He speaks in learning sessions and also does pro-bono talks once in a while to impart his knowledge in recruitment. Connect with TJ Pestaño on LinkedIn