10 Facts about the Status of Startups in the Philippines Today 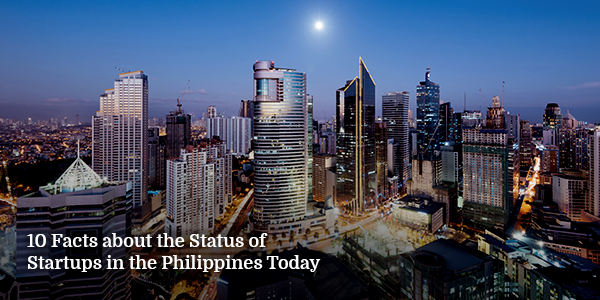 The current state of the startup industry in the Philippines is reaching new heights, and its future is only set to get brighter.

Both foreign investors and local entrepreneurial veterans have been capitalizing on business opportunities in the Philippines today. It’s not uncommon to hear about successful companies that were founded in less than a decade and thriving in the country’s economy. Plenty of talents also want to work in this landscape now, as any experienced hiring manager or recruitment agency would be likely to say. But how exactly did the startup scene emerge in Manila?

How the Startup Scene Exploded in the Philippines

First off, let’s define terms. According to Trade and Industry Undersecretary Nora Terrado, a startup should satisfy three conditions to be called such: (1) a potential to scale, (2) uses non-traditional business models and emerging tech, and (3) has an intention to solve a social problem.

Perhaps the earliest milestone in the scene was the establishment of Philippine Emerging Startups Open (PESO) in 2005. However, the 2017 Philippine Startup Survey revealed that only 11% of known startups today were established before 2012, and the year where most startups were founded was in 2016. The common industries that entrepreneurs venture in are retail, education, fintech, shared service facilities, and digital services.

If you’re planning to quit your job and build a new company, or you want to invest in a startup, here are some facts you should know about the Philippine startup industry.

2. Approximately 88% of the interviewed founders cite capital requirement as the number one challenge they experienced when they were starting.

3. In the same survey, 54% mention regulatory requirements and 50% say general economics or business conditions are the second and third most common hindrances at the beginning of their ventures, respectively.

4. Most startups value and need financial backing in the beginning stages of the business. In fact, 94% of the startup leaders said they are planning to welcome an investor in the next three years.

5. Lazada is the top startup by revenue. Launched in 2012, the online shopping platform is continuing to perform well and is one of the top resources modern Filipino shoppers look to for an array of products.

6. Most startup founders are “serial entrepreneurs”, and that 56% of startup business owners have put up anywhere between one to three companies in the past. This also shows that the same corporations or individuals own most startups because of their existing entrepreneurial knowledge and broad network.

7. Most startups reportedly only need $1 million for capital funding and maintenance, but most founders are not comfortable borrowing from banks. They are more likely to tap investors than loan money.

8. The Philippines is a hotspot for startups as entrepreneurs view Southeast Asia as a primary market to tap. There’s also the significant advantage of Filipino workers who are fluent in English as well as cheaper labor that translates to reduced business cost.

9. Business owners say the available market (39%), availability of talent (20%), and low barriers to entry (16%) are the top three factors that helped them build a startup.

10. Survey says technology, services, and customer experience are the top three areas that majority of startups are looking to innovate in the next three years. This is in line with the global shift to customer-centric marketing and the application of emerging tech in businesses.

What Does This Mean for Entrepreneurs?

While starting a business will always have its risks, the entrepreneurial shift of millennials and numerous tech advancements have paved the way for better opportunities and inspiration for others to follow the same path. A lot of big names in specific industries are startups, like the online fashion shop Zalora and the ride-sharing app Grab.

Despite the growing number of startups present, investors and business analysts still point out the infancy of the Philippine startup scene. There’s still a lot of room for potential and growth. But as the country has the second fastest growing economy in Asia, it’s one of the best places to innovate for emerging markets, social enterprises, and tech.

Christopher Star, the Manila chapter head of Tech in Asia, intelligently points out that to genuinely survive and thrive, Filipino entrepreneurs must look beyond the local lens and think bigger to attract foreign investors and catapult their business idea on a global scale. There will be a lot more changes in the next five years where the startup culture will continue to grow and go head-to-head with the outsourcing industry.

If you’re keen on building a startup of your own, then there’s no time better than the present. There are plenty of resources now more than ever to help you actualize your idea, from workshops and learning materials to networking events and interested investors who want to do business in the Philippines.