Stop These 3 Cultural Biases That Can Affect Your Recruitment Process 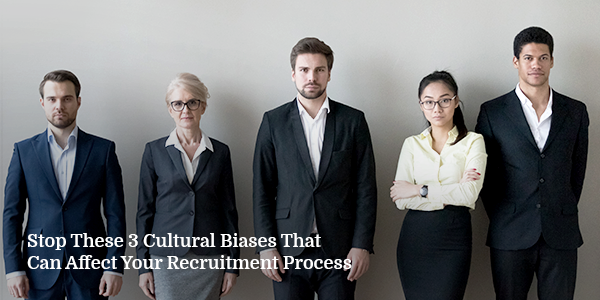 In general, you make decisions based on a number of relative factors, such as your personal beliefs and previous experiences, to help you weigh your options.

When it comes to recruitment, this kind of approach – where you rely on your own subjective point of view to make decisions – can lead to unconscious bias in evaluating and hiring candidates. Unconscious bias happens when you develop a quick and baseless opinion of someone without you intending to do so.

After all, it’s natural for most to prefer those who have similar beliefs and principles over those with different backgrounds. As humans, we take comfort in familiarity.

Bias in recruitment is a global phenomenon. Whether you’re a recruitment agency for Asian or Western companies, cultural biases can sneak their way into your recruitment process. Here are some examples of recruitment bias found across cultures, which you need to put a stop to.

Gender bias simply pertains to preference for one gender over other gender types. Today, the gender spectrum is no longer limited to females and males but includes other gender identity. If your organization’s workforce is predominantly composed of a specific gender type, there might be gender bias brewing there.

It could also be that there’s no balance in the number of management positions assigned to females, males, and other genders – this is another form of gender bias. Let’s not forget the issue of pay gap, which is closely tied to gender inequality in the workplace.

Altogether, these forms of gender bias can prevent you from attracting and retaining top talent, not to mention hold you back from gaining multiple perspectives on how to make your company more innovative and profitable.

In high-income Asian countries, such as Japan, gender bias starts even before students establish their professional career. For example, in Tokyo Medical University, female students who want to become doctors are reportedly victims of rigged scores in entrance examinations, so that their male counterparts get the upper hand in being accepted at Japan’s prestigious medical schools.

Cases like this result in certain industries under-representing women in businesses or service-oriented sectors, causing the female workforce to settle for informal jobs. This has been the situation in India, Indonesia, and other developing countries, where women have to deal with some sort of invisible barrier that prevents them from getting higher-quality jobs.

When it comes to salary, Asian women earn 15% less than men on average. Although this figure represents the overall salary gap between female and male employees without considering the type or level of work that they do, the fact remains that companies in Asia favor men over women. This may be the reason why female employees in Hong Kong, Indonesia, Malaysia, Singapore, and Vietnam are reporting different forms of work-related discrimination, ranging from salary increases to promotion opportunities.

Gender Bias in the West

The lack of enough women representation in U.S. business firms is also evident in these numbers:

Even job ads tend to discourage female candidates from applying for certain positions. In some postings, companies would craft job titles or descriptions that include commonly associated words with males, such as “rock star” or “ninja.”

In reality, there are female rock stars and ninjas. These terms have been linked to men because of the preconceived notion that “strength” and being tough are masculine. According to a study by researchers from University of Pennsylvania, tweets that are about “love, friendship, and family” are linked to women users while “sports and politics” are from male users.

As an alternative, you can avoid gendered pronouns and focus on the content instead. Make sure that the job title and description are universal. You can do this by trimming it down to the role of the job and the specific skillset needed for the position. Without taking away the creativity in these job ads, you can explore your creative options in the job description. For example, instead of using “Social Media Ninja”, you can use:

Women with children are also at a disadvantage, as recruiters are more likely to consider men or even women who are childless even though their qualifications are identical. Employers think mothers will be tied to their child-rearing responsibilities at home, which might cause them to miss work on certain days.

Age is another potential issue in recruitment, especially if workers or candidates are aged 40 and older. There’s that notion that older people are slower and are less adept at using technology. As such, they won’t be able to keep up with the working style of millennials and other succeeding generations in the workforce. Thus, companies are accused of not valuing older workers and prefer to hire younger candidates.

But ageism should not have a place in any organization. Not only does it contradict the call for equal employment opportunity, but it also disregards the wealth of talent, experience, and wisdom that senior employees can contribute to the company.

Age Bias in Asia and the United States

Ageing populations are prevalent in Asia. In fact, statistics show that more than 50% of the world’s older people are living in Asia, with the number projected to increase to 75% by 2050. Although Asian nations are less critical of ageism – allowing employees to extend their number of working years – there’s no formal legislation to protect older employees from discriminatory policies or practices in the workplace.

This is in contrast to the West, where employees are protected from age discrimination through the Age Discrimination in Employment Act (ADEA) and the U.S. Equal Employment Opportunity Commission (EEOC). The only time that companies can set an age limit for their applicants is when they can prove that a certain position needs someone with a specific age qualification to keep the business in operation.

Yet the EEOC received almost 21,000 reports of age discrimination in 2016, revealing that the bias of ageism still slips through the cracks in a number of U.S. companies. Furthermore, research suggests that even at the screening stage, employers discriminate against someone’s age 41% of the time, responding more positively to applicants in their 30s than those in their 50s.

There are also employers who evaluate applications based on the image that applicants project during interviews. Understandably, you’ll want your candidates to appear confident, enthusiastic, and friendly as they meet you face-to-face during the recruitment process.

However, there’s the danger of focusing too much on the external qualities of candidates, including their facial expression and physical attributes, without being aware that you may be forming a stereotypical view of what an ideal employee should look like.

Recently, research from Stanford University claims that one of the reasons why U.S. jobs seem to be elusive for Asian-Americans compared with their European-American peers is that the former appears less excited during job interviews. Between these two groups, Asians are perceived to be more passive and stoic than Americans, which employers take as a sign of a weakness with little to no leadership potential.

Putting a Stop to Cultural Biases

Here are some ways that you can prevent cultural biases from negatively influencing your hiring decisions:

Hiring decisions should always be based on the professional experience and skills of candidates instead of personal or cultural biases. If you allow biases to get the better of you, you might have a more difficult time in trying to achieve diversity in your organization, which is an essential business component that brings about innovation, growth, and success. It’s all about finding the right balance of familiarity in similarity. If you want to achieve comfort in working together through common factors, then you can exclude personal or cultural biases and prioritize similar experiences instead.

In line with that, you should keep in mind that bias towards a specific culture, gender, and age doesn’t necessarily translate to a better performance. Your assessment of your candidate’s ability and skills should be free of bias towards his or her cultural, gender, and age background. You have to look at quantifiable elements that will bring success to your company.

TJ is a seasoned recruitment professional with a career spanning over 10 years. He has experience recruiting for various industries such as BPO, IT, Banking and Finance, Retail, Logistics, FMCG, Manufacturing, Legal, and Insurance. In recent years TJ's focus has been on high-end IT roles and headhunting for executive level functions. With a proven track record of excellent stakeholder and client management skills; and outstanding candidate experience, TJ is also an effective mentor to candidates and recruiters of Manila Recruitment. TJ has recently taken on a Recruitment Relationship Manager role, whereby he assists prospective clients of Manila Recruitment to convert their needs into detailed talent engagement plans to be delivered upon by the company's team of corporate and technical headhunters. On a personal note, TJ is happily married and a father of two adorable children. He spends his free time giving back to the community by being an active member of the local HR Community. He speaks in learning sessions and also does pro-bono talks once in a while to impart his knowledge in recruitment. Connect with TJ Pestaño on LinkedIn