8 Management Tips for Resolving Employee Conflicts in the Workplace 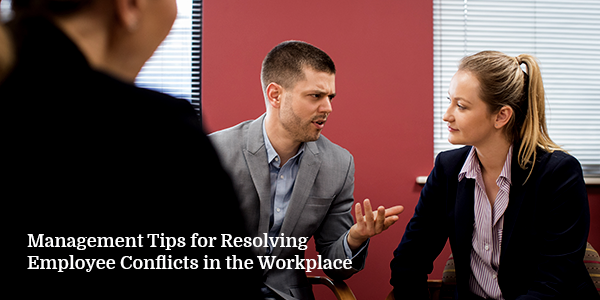 Workplace conflicts between employees are inevitable due to different factors. Some may be work-related while others are not, but realize that such disputes are normal and healthy. Many even believe that it’s vital to an organization’s success.

Experts have found that teams with members who get into healthy arguments with each other are the most effective. When a culture gives way for dissent, innovation, and diversity of thought are encouraged, thereby resulting in better decision-making.

Admittedly, though, not all office tensions are of the healthy kind. According to organizational psychologist Michael Woodward, an unhealthy conflict is one that “becomes personal and emotional, where judgment gets clouded.”

HR team and managers should learn how to deal with this kind of dispute. Here are some tips for confronting an unhealthy workplace conflict.

Know when to step in

As a manager, knowing when to take action in the midst of the conflict is tricky, but according to Joseph Byrnes, professor of management at Bentley College Graduate School, it’s probably when “things are getting out of hand, and the problems are affecting or disrupting their and other people’s work.” Until such time, give both parties a chance to resolve the skirmish on their own.

HR should act as a witness and ensure that the employees treat each other with dignity and respect during discussions. Having them around ensures that both parties will approach this maturely—that the working relationship will continue if resolved or professionally walk away with no hard feelings, if not.

In addition, HR should ensure that an employee won’t quit over the matter or threaten to do so, and that the issue will not affect employee morale and the company as a whole.

Learning and understanding the root and details of the conflict is the first step for mediators. Both sides should tell their story. While this may add to their distress and aggravate the conflict, it’s an important step, nonetheless.

This will also allow management to know if the argument is work-related or an interpersonal one.

Read the clues when talking to employees

People react to disagreements in different ways, and it pays to understand what the normal reactions when confronted really mean.

Silence means that the employee is too afraid to say anything that might provoke discipline. Carefully word your questions and comments to make them more comfortable and assure that you want to help and not punish.

Crying is a normal reaction when the employee is taken by surprise. Be sympathetic, let them compose themselves, and assure that you’re only talking to correct things.

A nervous giggle is normally just a defense mechanism to hide off shock and worry. Do not laugh along nor overreact to the laughter. Instead, speak firmly and explain that you’re helping them recognize and correct their ways.

There are also those who respond with anger and defense because they don’t feel responsible for the problem. Keep your cool until they regain their composure and detail the problem with facts.

Finally, profusely apologizing means the employee is hoping that the humility and submission will get them off the hook. As long as the apology also means agreeing to the problem and cooperating, then there’s nothing to be wary about.

A meaningful discussion is where you find the true impediment in the conflict—the motivating factor and the thing that’s keeping both parties from agreeing to a solution, as well as the implications to the bigger picture.

The resolution isn’t about finding the winner and the loser, but it is important that the parties in disagreement are the ones to find the conclusion. It is necessary to get through the conflict to find the solution.

All options brought to the table should be discussed positively, with the unworkable ones also to be agreed upon. As part of management, keep in mind that disagreement may also come with a potential for growth and development. It can stimulate innovation and learning as an upside in the difference of opinions.

It is important for a manager to resolve a disagreement without offending or alienating either side. When one party is seemingly favored, it could “create irreparable barriers, decrease productivity, as well as dampen morale,” according to clinical psychologist, William Knaus.

Mediate carefully without taking sides. Keep the focus on solving the problem and don’t be sidetracked by personal or political issues.

Don’t turn back on employees

People come in different shapes, and admittedly, you’re bound to clash with someone and cause major tension. Do not sacrifice your relationship with your employees just because you want to avoid office conflict.

A smart manager would know how to deal with rather difficult employees. It means keeping the focus on tasks, projects, and results, and not letting their personal feelings get in the way of treating everyone the same, nice way.

Know that it’s not your full responsibility

While it’s the manager’s responsibility to fix the problems on their team, employees also need to develop their conflict management skills. This means being accountable for conflicts and solving problems outside of their work behavior or performance.

In addition, people should learn to manage their own disputes while still at the lower level before pushing it up the organizational chain.

The office setting will always be filled with disputes, misunderstandings, and disagreements, with all the diversity in belief, opinion, and personality it houses.

While feelings are hurt, and relationships sometimes get severed, remember that issues are part of life, but can be resolved professionally and maturely.