Hiring a Node.js Developer? Here are the Must-Have Skills [Infographic] 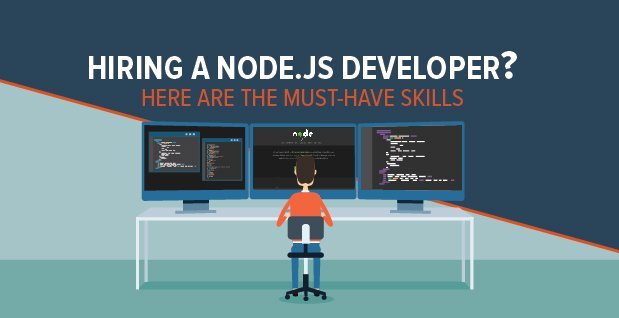 Node.js is an open-source programming language created by Ryan Dahl in 2009 for building full stack applications. Although it was originally written in C++, Node.js was built upon Google Chrome’s powerful V8 JavaScript runtime.

Web development is significantly easier and faster With Node.js’ library of modules, frameworks, IDEs, and tools. More developers are also using Node.js to build web applications and software because it’s lightweight and scalable.

Node.js is predicted to become one of the mainstream programming languages in the coming years. Thus, Node.js developers are highly in-demand, making it crucial for HR recruiters and managers to know the must-have skills for a Node.js developer position.

When hiring Node.js developers, a recruiting firm in the Philippines or IT headhunters should know the skill sets to look for.

1. At Least 3 Years of Experience in Node.JS Development

As an open-source platform, Node.js has been improved by various contributors since its creation in 2009. Its library consists of a wide variety of Node.js frameworks, IDEs, and tools.

With at least three years of experience working with Node.js, a web developer should have numerous Node.js projects under their belt. It would be better if the developer actively contributes bug fixes and patches to the Node.js community.

Their active participation and contributions to the Node.js projects are evidence that they have a solid understanding of Node.js internals. This also shows that they are great team players who are passionate about custom software and web application development.

Front-end development refers to what end users see on an application from their end. Therefore, knowledge in front-end design and development such as HTML5 and CSS3 is necessary for Node.js developers.

Frameworks are intrinsic to the Node.js ecosystem, as they expand the features and functionality of Node.js. While there are numerous Node.js frameworks to choose from, it’s highly important that the web developer you hire is knowledgeable about various frameworks.

Other must-know Model-View-Controller (MVC) frameworks for Node.js include Strongloop, Sinatra, and Rails. Additionally, there are full-stack MVC frameworks that offer more features out of the box. This includes Keystone.is, Meteor, ActionHero, and Derby.

Every Node.js developer needs to know how to interpret existing API codes to adopt its use to their own projects. In short, they need to handle interactions between multiple systems.

5. Good Grasp of Asynchronous Programming and Its Workarounds

Non-blocking or asynchronous programming is what Node.js is all about. With asynchronous I/O, the waiting time for requests can be significantly reduced. Two or more functions can be executed at the same time so that developers can be more efficient and productive.

But, because asynchronous programming is a fairly new method, there are still quirks that need to be considered by every developer. Without a proper understanding of its workarounds, developers won’t be able to perform appropriate actions.

As a result, developers will take more time with their projects. That’s counterproductive, and you don’t want that.

Database management is one of the skills needed to build Node.js applications successfully. Node.js developers should create database schemes that represent and support business processes.

Web developers should also integrate multiple data sources and databases into a seamless system. This is important in configuring applications that can efficiently serve the business workflows of any organization and company.

A web developer should have working knowledge in user authentication and authorization between multiple systems, servers, and environments. This helps ensure that the web applications they create are highly secure.

Make sure the web developer you’re hiring knows his stuff when it comes to security.

Not all codes are efficiently written. Codes need to be object-oriented so that it’s easily readable. Some web developers and programmers create codes that only they can understand, making it difficult for other developers in the team to understand their work and make necessary updates or changes.

It’s important to make sure that the Node.js developer you’re hiring follows standard practices to ensure continuity of work. Developers need to be good team players. If they don’t write code efficiently, then it may hinder team productivity and their projects’ ultimate success.

Security is becoming an increasingly complex issue in today’s digital world. Any IT expert would tell you that implementing data protection systems in web applications or programs takes top priority. This prevents hacking events, security breaches, and data theft.

Error-handling is a crucial part of developing software and applications that work right. Make sure that the web developer you’re hiring knows exactly when to crash, when to log an error, when to continue, and when to retry.

Troubleshooting and syntax manipulation are basic problem-solving skills that every Node.js developer needs to demonstrate.

1. Experience in Client-Side and Other Node.js Frameworks

Experience in using a variety of full stack MVC frameworks will show you that a web developer is passionate about what he does. This means that he’s tried out various client-side and server-side frameworks to keep his skills updated.

These common frameworks include Meteor.js, Angular.js, Blaze, React, and more. Node.js developers should be more than capable of using a different framework should the need ever arise.

Sails is an MVC framework used for customized, data-driven web APIs for larger businesses and enterprises. It’s capable of simplifying processes for real-time chat applications, dashboards, and the like.

Familiarity with various frameworks demonstrates advanced skills that not all developers possess.

3. Working Knowledge with Workflow Automations Such as Gulp or Grunt

Gulp or Grunt are task runners and node package managers (npm) that are essential in the speed and efficiency of web applications. You want your software and applications to work right and perform quickly. This is an advanced skill for web developers

The demand for Node.js developers is steadily rising. IT recruitment firms need to make sure to hire web developers with the right skill sets who can help address needs in various business processes and workflow automation.