Guide to Major Business Centers in the Philippines [INFOGRAPHIC]

Doing Business 2016, an annual report that measures the regulatory quality and efficiency of doing business in a country, states that, globally, the Philippines stands at 165 in a ranking of 189 economies on the ease of starting a business.

In comparison to its Asian neighbors, the country scored 60.07 in “ease of doing business” while Malaysia, which ranks the highest in its region, scored 79.13.

Moreover, the country has taken steps to make its location lucrative for industries. Over the last five years, according to Doing Business 2016, the Philippines has bridged gaps for businesses by streamlining communications between Securities Exchange Commission and the Social Security System, thereby accelerating employment processes.

Today, the country’s economy is propelled by the Information Technology-Business Process Outsourcing (IT-BPO) industry. It has turned the Philippines from the once laggard of Asia into one of the region’s fastest growing economies.

This year, The BPO industry is projected to experience an overall positive growth rate, projecting the total income range to reach $20 to $27 billion and $40 to $55 billion by 2020.

The industry, currently holding about 1 million directly employed employees, is also projected to increase employment by providing a total of about 1.3 to1.5 million new jobs, which would consist of employees directly and indirectly employed.

This greatly impacts the overview of the country’s major business districts. As of today, the IT-BPO sector has spawned bustling business districts in Manila with skyscrapers, 24-hour buffets, and condos that sell for $500,000.

It is good for businesses, as well as their Philippine recruitment agency to take advantage of the country’s imminent growth by establishing itself and its workforce in a location where progress takes place. Being at the center of growth and advancement should be part of any business’ strategy.

As a guide, here are the major business centers in the Philippines.

Also called The Fort or BGC by Manila locals, the Bonifacio Global City is the financial district of Taguig City. In recent years, the district has experienced robust commercial growth through the sale of military land by the Bases Conversion and Development Authority (BCDA).

The entire district used to be the part of the main Philippine Army camp. Today, it shows promise in overtaking Makati as the premiere central business district (CBD) of the country.

The location reflects strong potential, specifically in the growing share of office locators led by companies and knowledge process outsourcing, according to a global real estate services firm. 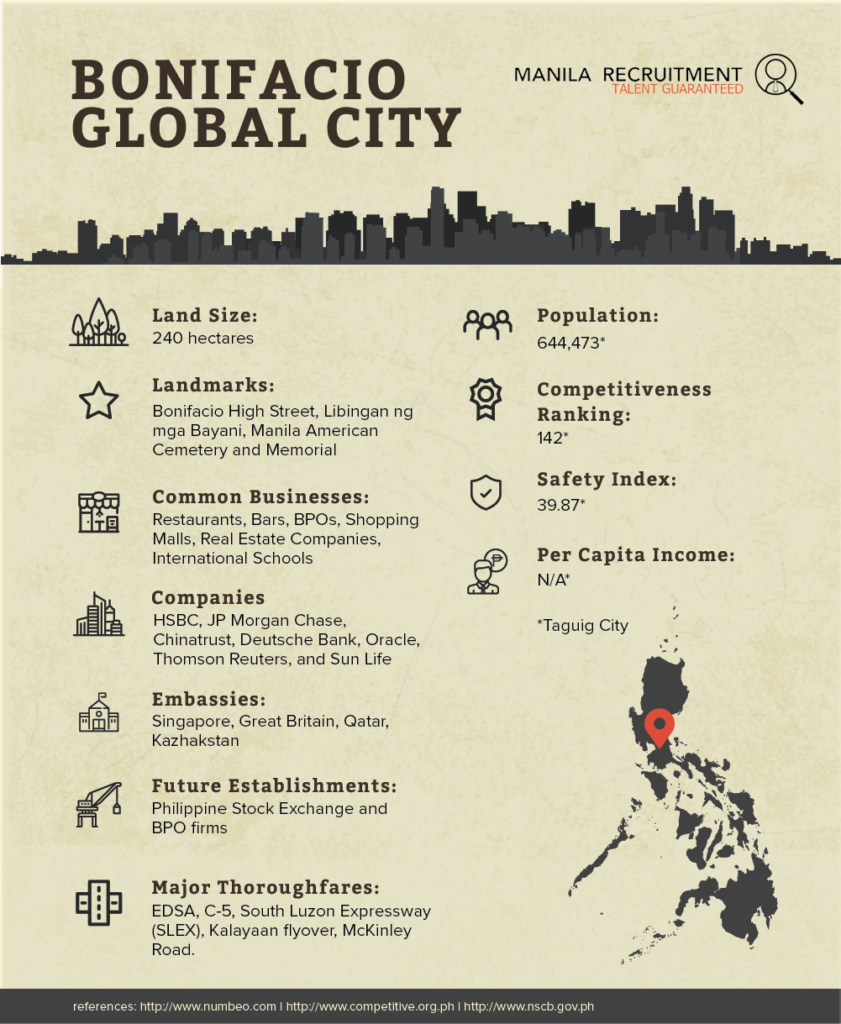 Also known as the Makati CBD or Central Business District, the Ayala Center is the leading financial and central business district in the Philippines located in the heart of Makati in Metro Manila.

It is also called the “Central Cluster,” containing not only the famous Philippine Bank of Communications (PBCOM) tower but one of the most vibrant commercial and shopping areas in Asia. The financial district is managed by two groups—the Makati Commercial Estates Association (MaCEA) and the Ayala Property Management Corporation (APMC).

Despite competition from neighboring cities in recent years, Makati remains a popular area of choice for many Filipinos and expats. It offers a very cosmopolitan lifestyle, has many reputable schools and excellent hospitals, and boasts some of the most high-end shopping malls of Metro Manila. 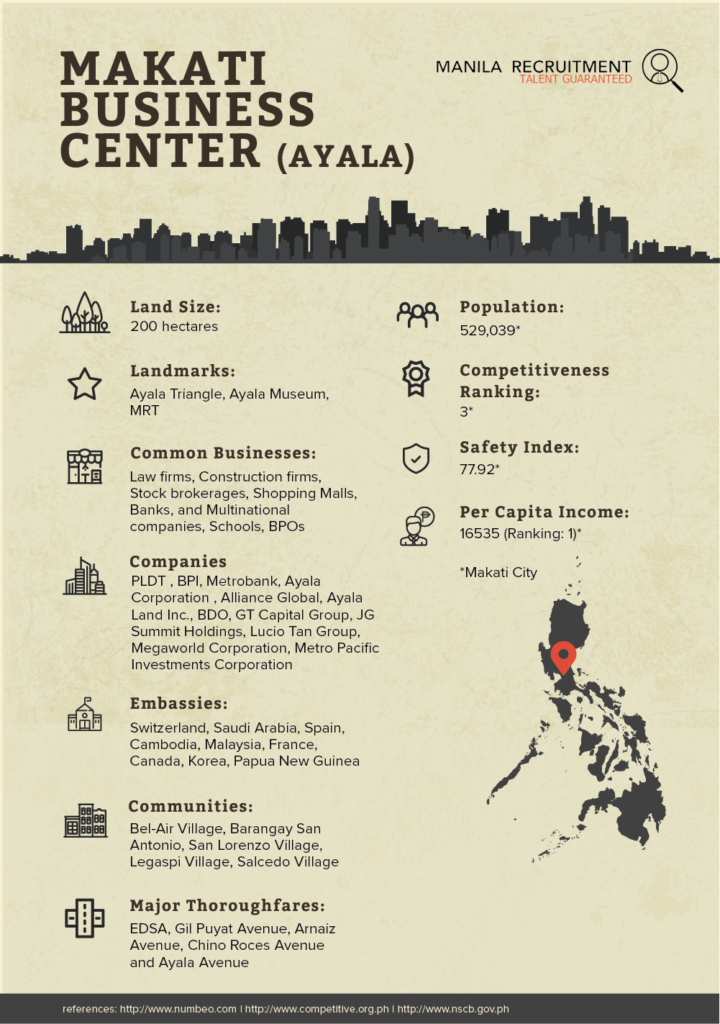 Adjacent to the Makati CBD is the Rockwell Center. This is a development established in early 2000, consisting of high grade residential and office towers, as well as a retail complex. Further development of this area is planned to include a 6-star luxury hotel and further office towers.

The Rockwell Center is a high-end mixed-use area in Makati City, Philippines. It is a project of Rockwell Land Corporation, which is, in turn, owned by the Lopez Holdings Corporation.

Rockwell Center was first developed in 1998 and is being expanded since 2012. Its centerpiece, the Power Plant Mall, opened on December 26, 2000. The Rockwell Center includes office buildings, condominium towers, a law and business school, and a shopping mall. 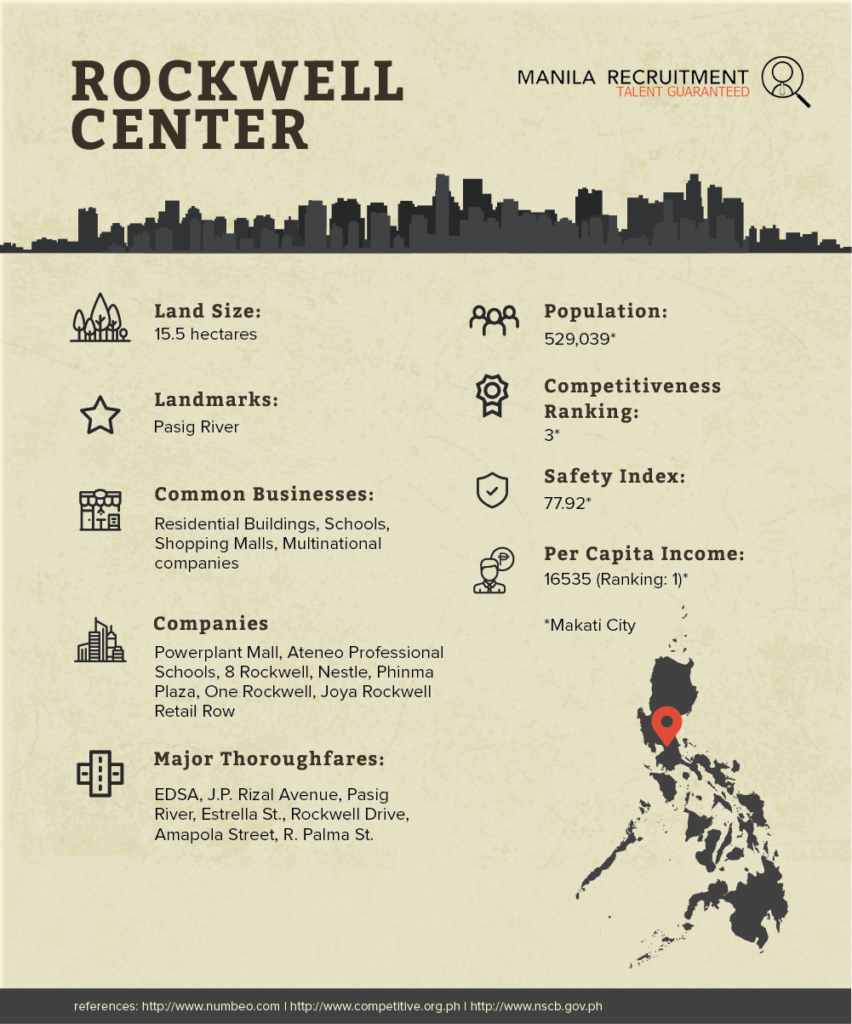 This location straddles the cities of Mandaluyong and Pasig, and is basically a commercial area along the EDSA Avenue that extends as far as Shaw Boulevard in the South and Ortigas Avenue in the North.

It is home to the Asian Development Bank, San Miguel Breweries, and the SM Megamall. This area is emerging as a center for the IT industry and the potential for further development remains considerable. Rental space is generally less expensive than in the Makati CBD. 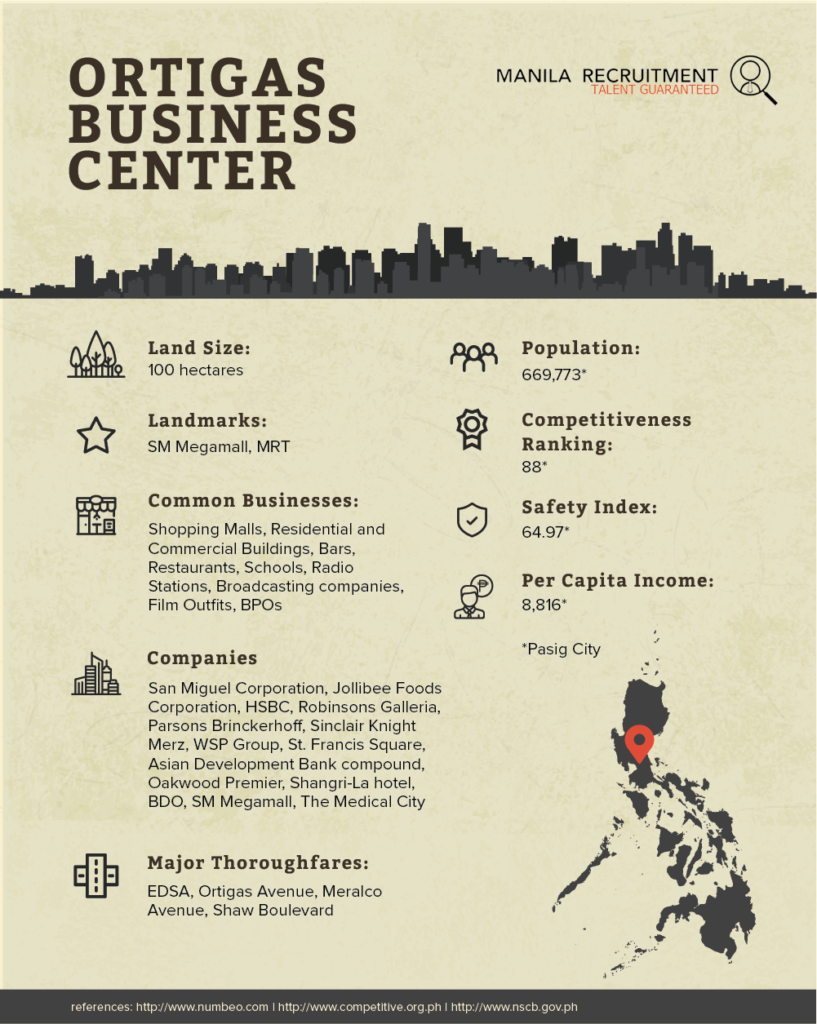 Barangay Alabang, part of the second district of Muntinlupa, has undergone tremendous growth mainly due to a development boom in the late 1990s.

The development of high-end, large-scale commercial real estate projects; the Filinvest City, changed the landscape of the Alabang from what was once vast fields of a cow pasture in the late 1980s, into a district that houses new residential, business, industrial, and commercial establishments. 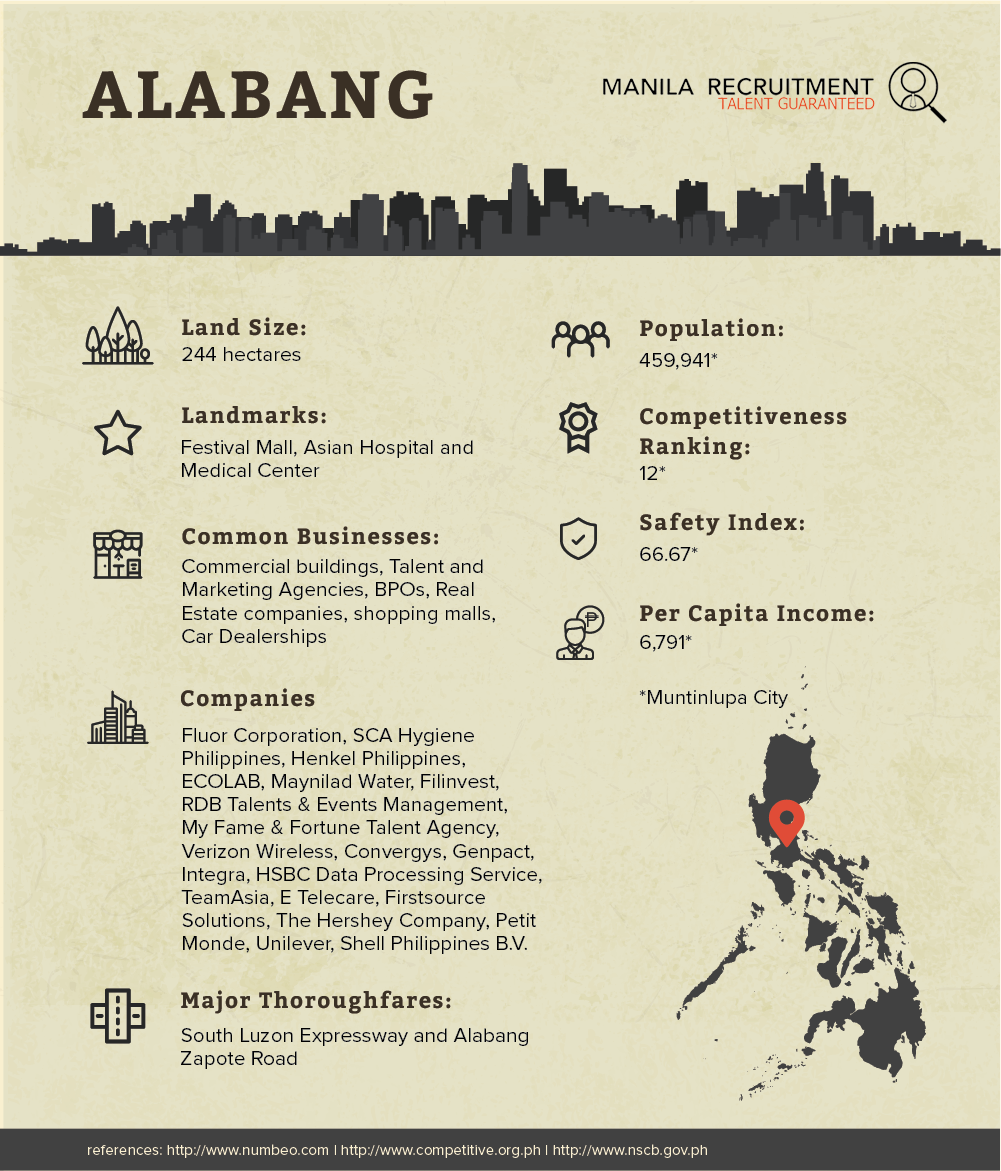 Named after Dayang-dayang Pasay, a princess of the pre-colonial Kingdom of Namayan, Pasay is the one of the first cities of Metro Manila, and is filled with tons of attractions. 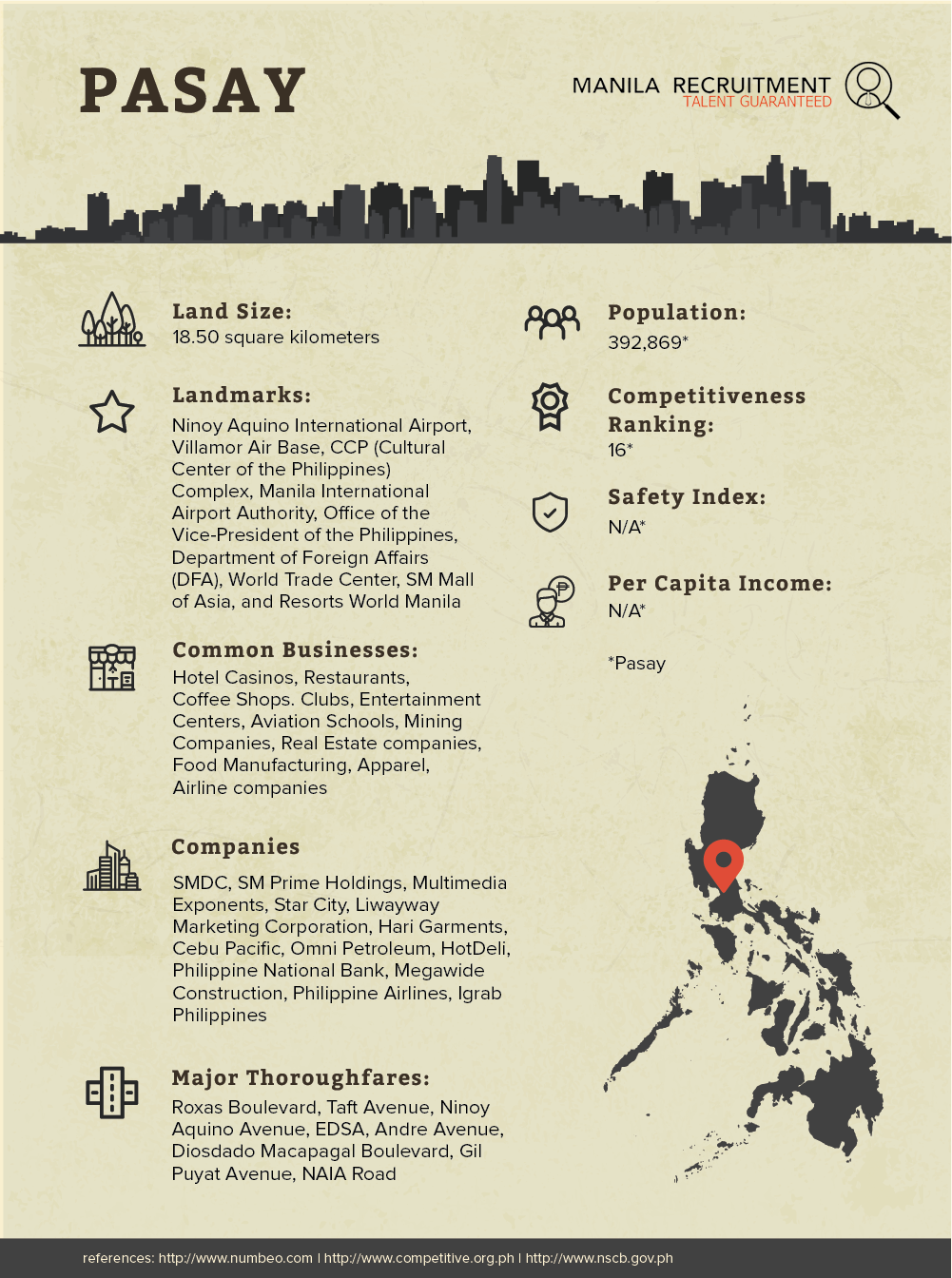 Triangle Park is a mixed-use CBD development intended to serve as the gravity of all commercial activities in Metro Manila in the coming years. It is located in Barangay Bagong Pag-Asa, Diliman, Quezon City, Philippines and organized around five districts, each with mixed-use character but with a distinct identity. 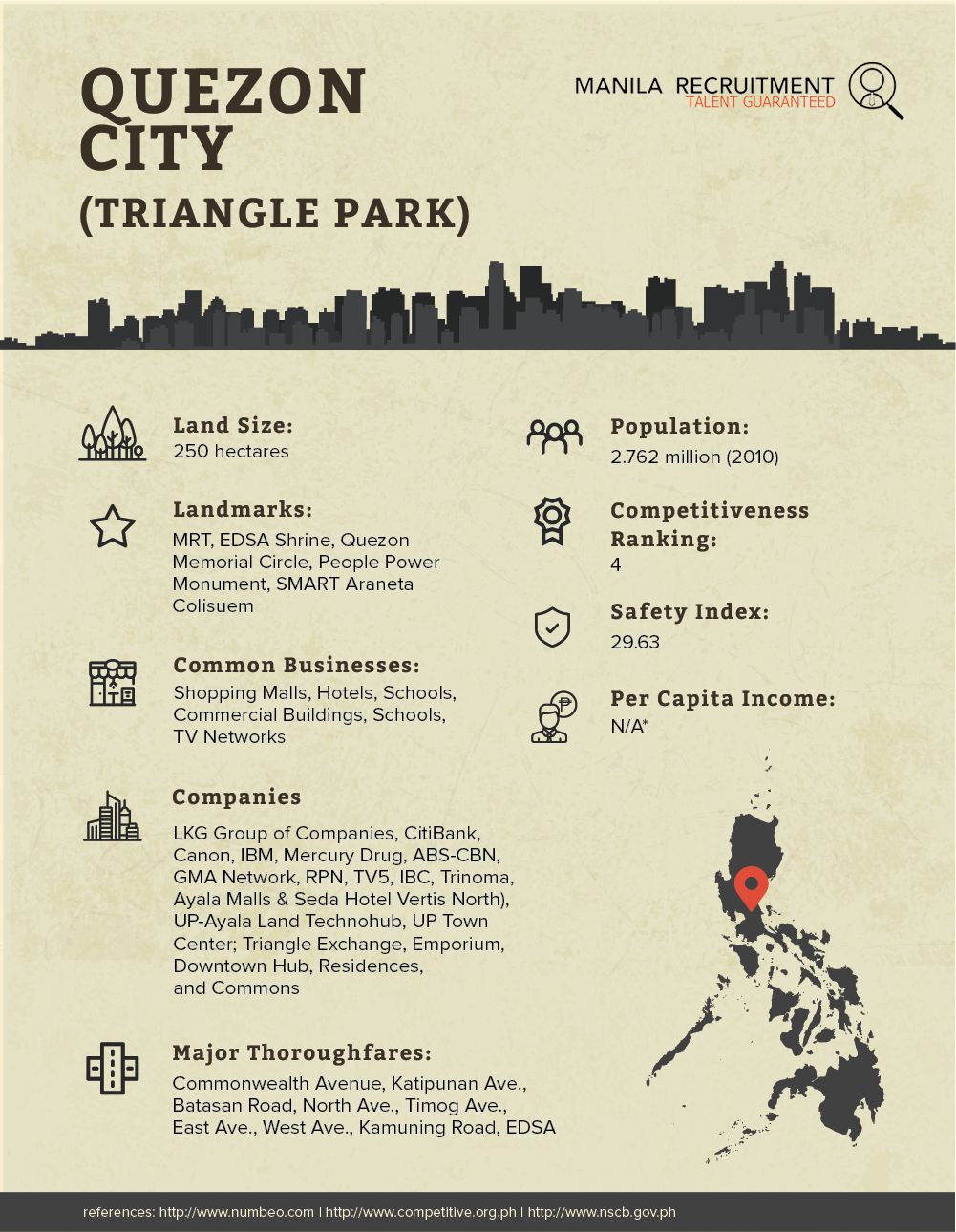 A robust and competitive local economy, nestled within abundant natural resources, has positively contributed to the rise of the real estate industry in the province.

For several years now, experts in the real estate field have predicted the growth of the industry in the province. With the continued interests of investors as the primary mover, it has had a domino effect on the residential and commercial viability of Cebu.

With over 20 IT parks and 9 economic zones operating in the province, discounting those currently in construction, Cebu boasts of globally competitive infrastructure with a highly capable workforce to boot. Investors are acknowledging these successful indicators and are increasingly bringing their businesses to Cebu.

Not only is Cebu a bustling metropolis, the 2nd largest in the country outside of Metro Manila, it is also a popular tourist destination. Gifted with serene white beaches scattered across its islands, natural limestone formations, and a breeding ground for some of the most majestic creatures in the world such as the whale shark, which is definitely worth exploring. The economy of Metro Davao is one of the largest in the country and the most economically active in Mindanao. Davao City, from which the metropolitan area is centered, is known as the “Crown Jewel of Mindanao” due to its status as the premier city, the financial and trade center, and hub of Mindanao.

Banana plantations in the northern part of the metropolitan area contribute to the metropolitan and the national economy. Local fruits such as durians, mangoes, pineapples, and mangosteens are also exported abroad. 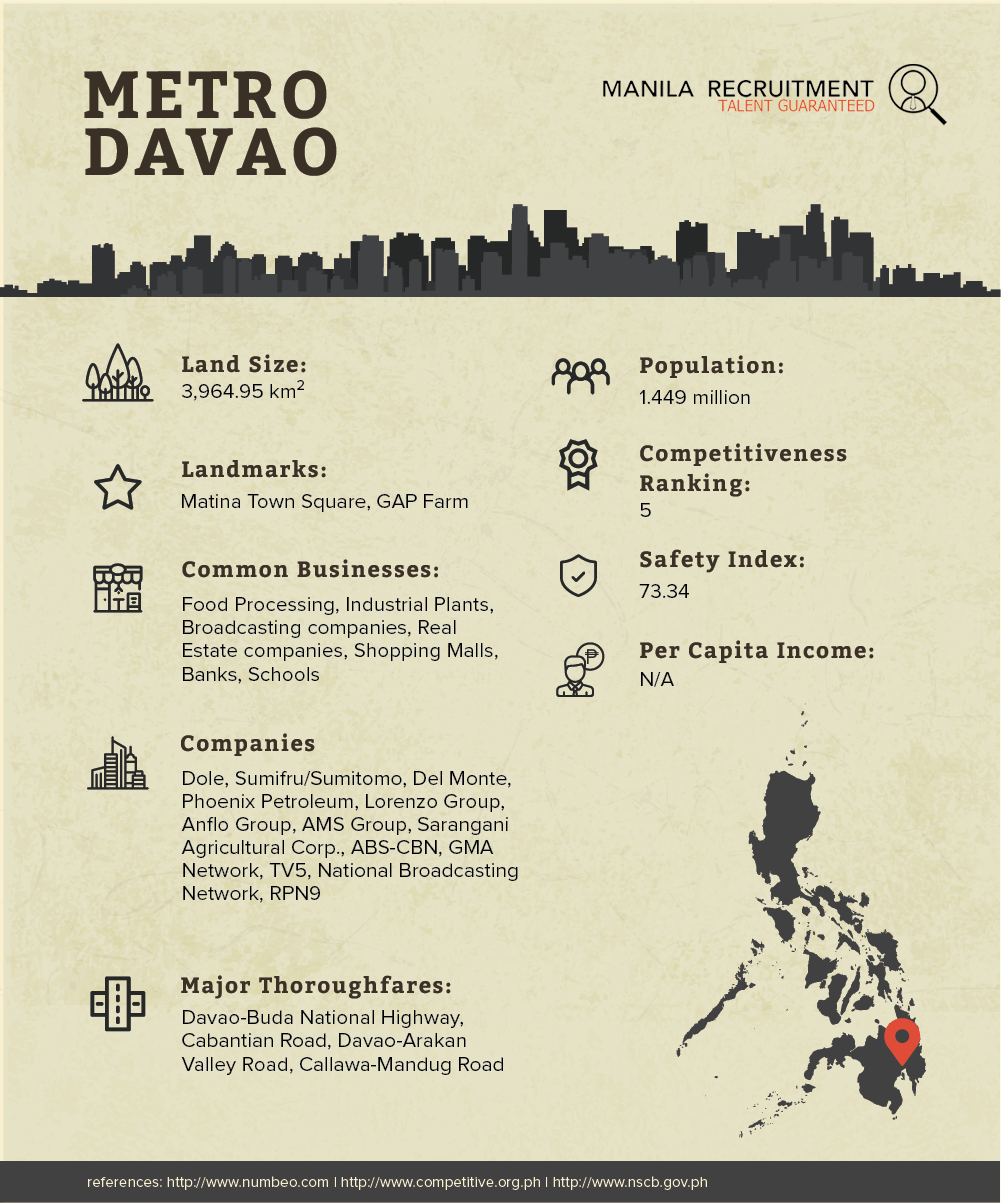 At present, the emerging business districts are fast-changing the landscape of businesses in the Philippines. Combining 1,300 hectares of developed land, these include Eastwood City, Araneta Cyberpark, UP Techno Hub, Rockwell Center and Filinvest Corporate City, the Philippines is indeed becoming a developed country that is beneficial for both investors and employees.

WE LEAD INNOVATION IN HEADHUNTING

Manila Recruitment is recognized as the leading recruitment firm in the Philippines for headhunting, executive search, expert, technical and IT recruitment. We share an unrivalled passion to help your business succeed by understanding your goals, then sourcing and providing you with your number one asset – driven, dedicated and exceptional people!

Experience the Manila Recruitment difference, and give your business in the Philippines a competitive advantage by contacting us today. Whether you are exploring an offshore solution, or are an established entrepreneur, SME or Multinational in the Philippines, our team has the experience and a tailored recruitment solution to introduce you to the top talent in the Philippines.