How PH Elections Can Influence Recruitment and Investment 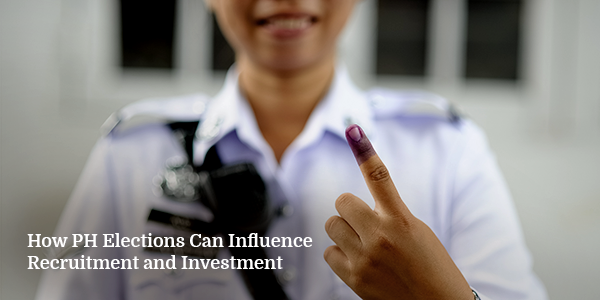 Government elections are always a huge deal for any country since the polls are part of a crucial process in determining who will be leading its people in the next few years. But as much as this important event has massive implications on a nation’s political and economic sectors, the results can send ripples beyond its own circle. It could have possible effects on hiring on a recruitment agency level and investment in the country through economic changes.

The Philippines will be having its midterm national elections in May, which will elect 12 senators, lawmakers in the lower house, and local officials across the country. This shift in power sparks changes that depend largely on the platform of the candidate who won a seat, so here are a few things that you need to keep an eye on:

Implications of the PH Elections

According to HSBC Global Research, President Duterte’s tax reform program is expected to continue to make its way through the lower house in 2019; however, it stressed the importance of being mindful of political developments leading up to the elections in May.

The report also stated that the tax reform agenda was put on the back burner due to the combination of various factors that include the fight against high inflation. These tax reforms will be back on track as one of the priorities in 2019, which is right in the middle of easing inflationary pressures. This will include packages involving corporate, real estate, and capital income taxes.

In 2019, HSBC said the economy is expected to grow 6%. If this actually happens, this would fall below the government’s 7-8% goal for the year.

Even in the midst of uncertainty due to the midterm elections, The Economist Intelligence Unit senior analyst Anwita Basu not only said the peso will stabilize against the dollar, but there will also be ‘some slowdown’ in inflation despite a slower headline growth rate compared to 2018.

It has been the norm for government projects to be put on hold during the elections, with most of them being done in full view of the public before the polls. This serves as a reminder to citizens of a politician’s service to the nation, but most actually dismiss this as grandstanding for the sake of getting votes.

The same goes for projects in the information and communications technology sector, where elections are considered both a boon and a bane. It provides opportunities to vendors during the campaign period but putting projects on hold due to a wait-and-see attitude on the outcome.

This is what happened during the 2016 elections, where an election ban for major projects was in place. However, it was also during this time when ICT vendors and service providers made the most out of campaign-related expenditures.

According to research firm International Data Corporation (IDC), elections generally steer end-users, specifically the enterprise sector, to a wait-and-see attitude when it comes to spending. Some are even forced to downgrade or cancel any major ICT-related expenditure due to the uncertainty the elections bring.

It should be noted that elections don’t deliver a negative impact on all industries since there is an intact economic process that keeps outsourcing and offshoring alive and well in the country. Election spending is set to provide a boost to the economy and offset any feared ‘slowdown.’

Political parties and their candidates for half of the senatorial posts, the lower house, and local positions are expected to spend, which will fuel the economy leading up to the May elections. Coincidentally, this will come at a time when the inflation rate seems to be easing off.

A stable political climate has complemented a solid economic growth in the past. And with the credibility of the most recent presidential elections, the combination of these factors has inspired confidence among local and foreign business owners.

In the outsourcing and offshoring sector, its status and growth will depend on the candidates who are vying for a seat in the government if their platform includes their full support towards these industries.

However, President Duterte’s remarks regarding the ‘separation’ of the Philippines from the US has caused some US companies to hesitate in their efforts to press on with their investments and expansion plans.

Fortunately, government officials delivered positive statements about one of these sectors as one of five strategic industries in the country, making businesses feel more comfortable. And with the absence of policy changes, the government’s support continues.

But when the situation was set to go back to normal, a new complication emerged when the newly elected president Trump issued warnings to companies setting up shop outside the US.

According to local media reports, the Philippine Economic Zone Authority’s tally of approved investment pledges dropped 26% after both presidents’ remarks. This is a sure sign that people who win a seat in the government have a massive influence on any industry.

What Does This Mean for Recruiters and Investors?

While there’s no data that directly relates the elections to the job market, there’s evidence that suggests political spending during these times boosts employment. According to a reported survey done by the Philippine Statistics Authority, the country’s employment rate increased from 93.4% in January 2015 to 94.2% in January 2016.

To put things in the right perspective, that’s 39.2 million employed Filipinos, with around 752,000 additional jobs created in between the survey period. However, labor groups have merely attributed this to the 2016 elections as temporary jobs related to the polls become available.

This may seem to be the trend during the start of an election. However, if the country elects good officials through clean and honest polls, local and foreign investors are likely to come in. And when this happens, the economy grows and sustained employment could be expected.

Elections seem to always be marred with uncertainties, with investors going on a wait-and-see status before making a move. This may be true in other countries particularly the US, but the Philippines tell a different story when it comes to investments.

A newly elected Philippines president would generally be welcomed with high optimism in the market, which means higher stock share prices. This is based on historical data from the last four presidential elections starting in 1992, where stock market trends tend to perform better in the first half of a president’s term, with returns averaging 15% a year compared to the last three years of a mere 5.3%.

Presidential and senatorial elections almost have the same implications. Based on the data above, presidential elections deliver positive effects to the recruitment and investment industries. The Philippines has experienced increase in employment rate and a spike in the stock market.

For the midterm senatorial elections, investors will carefully observe if this will affect President Duterte’s last three years in his term. This will serve as an assessment of current administration’s economical and political performance. Moreover, it will determine if President Duterte’s economic policies and programs have been approved by the voting public. Last but not the least, the midterm senatorial elections will have an effect to the legislative agenda of this administration.

With all of these in mind, it’s completely reasonable for investors to watch it all unfold first on May.

Elections Can Be Good for the Country

Essentially, the influence of a country’s elections is a matter of cause and effect, and the Philippines appear to have a positive reaction whenever the nation holds one. There might be a short lull in anticipation of the polls, but the effect thereafter tends to be good for both recruitment and investment. However, there is one caveat: elections should be clean and honest, with an outcome that’s going to have leaders steer the country to progress. This is, after all, what we want out of it, yes?